skip to main | skip to sidebar

Make your own TV chef 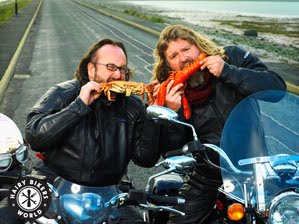 The Hairy
Bikers: Small
screen, big
appetite
I got a call yesterday from a development producer from a well-known broadcasting corporation. In one breath, she offered me the kind of power I have only ever imagined. We’re looking for new food talent, she said. Can you suggest anybody? Let it be known: I am a kingmaker.
I imagine that this kind of sweeping-under-the-stairs goes on every six months or so, but it’s the first time I’ve been involved in the process. The producers are based in far-off Brizzle, and it’s gratifying that once they’ve exhausted their stock of bright young Londoners, they’re keen to look, as Mike Neville so gently used to do, north.

The criteria for this low-key talent search run thus. Ideally, the chosen cook will be ‘brand new’, which means they haven’t done any telly, at all, before. They’ll be young, but not BBC3 young (which is lucky, as the only youths I know are the Skins who live two doors down, and they’re always stoned). They will be down to earth, which is a polite way of saying that one Valentine Warner is enough.

When I work in the screening room at Radio Times (a little cubby with three desks, lights that dim automatically, and excellent gossip), the TV editor thoughtfully puts the odd bit of food telly aside for me to preview. Specialist subject and all that, and while I’m watching The Hairy Bikers’ Food Tour of Britain, I can’t be irritating my colleagues by weeping over a fly-on-the-wall doc set in a teenage cancer ward. So recently I’ve enjoyed the sunshine food, if not the slightly forced demeanour, of Levi Roots’ Caribbean Food Made Easy, and narrowly missed out on Nigel Slater’s Simple Suppers, which starts on Wednesday and can only, like everything the quiet Observer cook-hero does, be a good thing.

Not all food telly works, and not all food characters work on screen, but I had a handful of suggestions. Canadian Jennifer Klinec, who runs cookery school Eat Drink Talk in Clerkenwell, is knowledgeable, striking and animated, and the viewers don’t need to know how scarily exacting she is to work for (I did two shifts as her assistant, one involving leaky croissants, and was never asked back). Abdulla Naseem, known as Naz, is a Maldivian chef cooking extremely good Italian food at Ramsons in Ramsbottom, where the dynamics of owner Chris Johnson’s team are fascinating to behold. Lisa Allen, the award-winning chef at Northcote in Lancashire, could easily follow her boss Nigel Haworth onto the small screen.

Of course, there’s no guarantee that a handful of young, vital, talented food people will make it ahead of a dollybird or boy with a tenuous link to cooking and a ‘passion’ for whatever foodie subject the primetime, daytime or digital audience hasn’t yet been exposed to. But for a brief moment, it felt like they just might. And yes, I did ask the nice lady to keep me in mind when casting food critics. When Kate Spicer frowns her last, that slot on MasterChef is MINE!
Posted by Emma at 08:16

Emma Sturgess is a food writer based in Hale, near Manchester. Fine restaurants, industry gossip and baking are key to her happiness. In 2009 she won the Guild of Food Writers award for Restaurant Reviewer of the Year. You can contact her here.
Tim Bowden is a journalist based at the same address. He is also one half of the band Stately Homes Of England. You can contact him here.